Last year I started tracking the total number of tweets posted to Twitter every day. I wrote a Ruby script that uses the Twitter API to post a new tweet to a private Twitter account and log the ID number of that tweet. That script runs once a day at the same time every day. Tweet IDs appear to be auto-incrementing integers, so we can track the total number of tweets posted in the past 24 hours by subtracting today's tweet ID from the previous one. Another Ruby script processes the log file so I can feed it to Excel to produce pretty graphs.

I started the script in April 2008 and promptly forgot about it before checking out the results today. 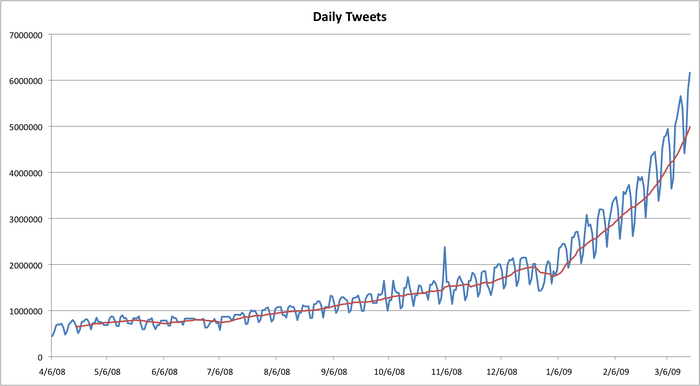 This graph shows the number of tweets posted each day for most of the last year. I had to smooth the data in a couple of places when Twitter was down… in those cases I just extrapolated between the closest two points.